Danielle Wood, the National and Victorian Chair of the Women in Economics Network, shares her reflections on the 2017 Federal Budget to the National Press Club.

Speech at the National Press Club Address, Tuesday 16 May

Thanks Katherine and to the National Press Club for having us. I’m absolutely thrilled to be here to participate in what I believe is the first all-female economic discussion to be hosted by the Press Club. Part of the vision of the Women in Economics Network is to raise the prominence of female voices in the national economic debate. Events like this clearly contribute to the goal.

I’m going to be sharing some general perspectives on the budget today. Rachel will talk specifically about the impact of some of the housing measures including the effects on women and young people. And Miranda will take us through her views on tax policies as well as discussing some of the broader implications of the budget for women.

First for the good news. The government has made some serious headway on budget repair. Overall the measures in this budget represent a $7 billion improvement in the budget bottom line in 2021. And the real figure is closer to $11 billion once you take into account the fact that the starting position was artificially inflated by the so-called zombie measures from the 2014 and `15 budgets that were never going to happen. The government has done the right thing in finally letting these go. 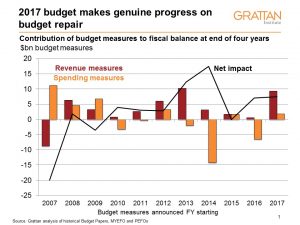 Grattan Institute and many other commentators been asking the government not to ignore the revenue side of the budget in trying to achieve budget repair. It’s pretty clear there’s no longer a danger of that! Almost all the budget repair effort comes from higher taxes. $5 of every $6 raised by budget measures are on the revenue side. I’ll leave it to Miranda to discuss how the taxes are being raised, and whether we could be doing it better, but it certainly signals a serious shift in the way the government is thinking about its budget repair efforts.

Efforts to fix the structural problems in the budget are to be commended. The run of deficits since 2009 has left net debt levels climbing – estimated to peak at 19.8 per cent of GDP in 2018-19, but will probably go higher for reasons I will discuss. This has left the next generation with a growing interest bill. Every time the government runs a $40 billion deficit, the lifetime tax burden for every 25-34 year old increases by $10,000. It also leaves less room for the government to respond in the event of another serious economic downturn.

But even with the repair efforts in this budget, a balanced budget is still a distant fantasy. The budget suggests we will return to surplus in 2021. 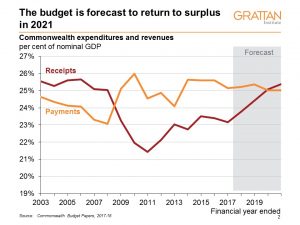 This is about as credible as the projected surpluses from the last 7 budgets – none of which ended up happening. 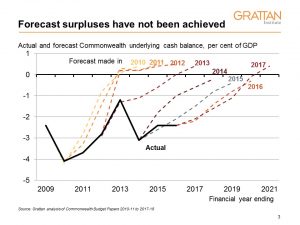 There is a lot of optimism built into the budget numbers both in terms of the future of the economy and the way in which this translates into tax collections. The wages growth assumptions are particularly heroic. You have to be a firmly in the “glass half full” or perhaps even the “glass overflowing” camp to believe wages growth will pick up from a sluggish 2% this year to 3.75% in 2021, on par with growth during the mining boom. 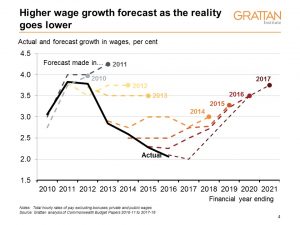 If wages instead continued to grow at 2 per cent, income tax collections would be $12.2 billion lower in 2021.

The government is also banking on a more than 30% increase in company tax and 60% increase in capital gains tax receipts by 2021. Similarly large increases forecast in past budgets have failed to materialise.

The trouble with optimistic numbers is that if you believe the budget will float back to surplus without much effort – where is the imperative to make the hard decisions?

I hope Treasury will revisit its projection methodology – so that the scale of the budget repair problem is more obvious.

The other potential concern with this budget is that in going all in on taxes, the temptation seems to be relax on the spending side. Of course not all extra spending is “bad debt”. The budget includes some valuable and well targeted new spending on schools and health. But there seems to be no effort to trim fat elsewhere – other than the university sector.

Yes, the Senate makes spending cuts hard. Yes, the opposition seems to be egging the government on in a spending race. But there areas where savings would be reasonable – including the family home in the age pension asset test, driving better deals on pharmaceutical pricing, shifting away from a direct action policy to a market mechanism for carbon abatement, and better targeting the almost $500 million in new regional spending announced in this year’s budget would be a good start. And it’s hard to believe the large and quickly growing defence budget – the only area where we make specific targets for funding to grow as a share of the economy – couldn’t be delivered more efficiently.

We heard a lot about good debt and bad debt in the lead up to the budget. Instead what we have is good debt, bad debt and invisible debt. The government has announced substantial new investments– $8.4 billion on the inland rail, $5.3 billion on Badgerys Creek airport – all sitting off balance sheet. This is exactly what the previous government did with the NBN. This hidden debt is only justified if the government expects to make a commercial return on the projects – if the stream of payments it generates covers the cost of interest and of paying off the infrastructure over its working life.

If these projects are indeed commercial it is unclear why the government needs to be involved. On the other hand if the expected returns are too low to warrant private sector involvement, they should be on balance sheet.

Even then there is the question of whether these projects would be “good debt”. Infrastructure Australia says inland rail will deliver one-dollar-and-ten-cents economic benefit for every $1 of costs. But there are a lot of downside risks. Grattan’s Cost Overruns report showed that on average, Australian transport infrastructure projects end up costing 24% more than forecast. And bigger projects have bigger average cost overruns.

When the government pursues risky and uncommercial projects off balance sheet it is future generations bear the cost.

In this budget we heard a lot about fairness. So this is a plea for a broader definition of fairness. One that not only takes into account the wants and needs of existing taxpayers but also those of future generations. We all know structural pressures on the budget are increasing over time as the population ages. Slower economic growth – if it’s here to stay – makes growing out of debt far more difficult. So for the sake of fairness, let’s hope that this government and future ones will continue to help move us to a more sustainable budget position.

This speech was originally published on the Grattan Institute’s website, at https://grattan.edu.au/news/national-press-club-address-women-in-economics-2017-federal-budget-reflections/. It has been reproduced here with permission.