“If politics is how human societies decide on sharing of resources, wealth and power, then in a dry country water is indubitably, essentially and unavoidably political. The Basin and its water are in the news because of allegations of corruption and water theft, because of dead fish and angry irrigators” — Margaret Simons

Water has many uses that generate economic activity, from the generation of power (through hydroelectricity) through to agricultural production, household consumption, and industrial use. Water, in many ways, can be seen as similar to any other commodity: it is a scarce resource that, in a market economy, will be subject to the laws of supply and demand. Thus, in a year with low rainfall, prices of water will increase, ostensibly causing the demand for water to decrease. Similarly, when water is abundant, prices will decrease, ostensibly causing demand to increase. Zhu (2021) argues that “…economics is a science about optimal allocation of scarce resources, economic instruments such as prices can adjust demand and supply and deal with externalities… As such, economics of water management has evolved as a branch of environmental and resource economics.” Zhu (2021) believes that there needs to be a balance between the demand for water and the supply of water resources “which can theoretically be achieved through price signals in water markets.”  Mechanisms such as water markets and water pricing have thus arisen as a result of an economic approach to water management.

In other ways, however, it is more difficult to view water as an economic commodity, with it instead a public good of critical importance. Water provides a myriad of an invaluable ecosystem and environmental services beyond economic activity. Water also, in many cultures, has a spiritual component, including to the Barkandji people surrounding the Darling (Barka) river. Moggridge and Thompson (2019) write that “The Aboriginal peoples’ worldview sees water as inseparably connected to the land and sky, bound by traditional lore and customs in a system of sustainable management that ensures healthy water for future generations.” Further, the hydrological cycle and geographic idiosyncrasies create special characteristics related to the questions of whether it is rival or non-rival for the users and whether the users are excludable or non-excludable from its use.” As such, water is not a standard private good. Thus,  “we may need to manage water resources by means of interventions that go beyond the simple economic system” (Zhu 2021).

As a result of the complicated nature of water as an economic commodity, economists and policy-makers have begun to create policy which “integrates the economic system and the natural water systems within a broad perspective of socioeconomic, institutional, political, legal, ecological, and cultural characteristics.” (Zhu 2021)

This article will examine the Murray Darling Basin Plan and its aims, the challenges it has faced and the problems of managing water rights in a highly variable climatic system, demonstrating that the politics and the economics of water in Australia are intertwined.

The importance of the Murray-Darling Basin cannot be understated: approximately 40 percent of Australia’s agricultural and pastoral production (irrigated and dryland) occurs in the Basin, which also supplies water to roughly 3 million people, including drinking water for much of Adelaide (Connell 2007). The Murray-Darling Basin also contains 30,000 wetlands—16 of which are Ramsar listed as wetlands of international significance—and a UNESCO listed World Heritage Site, 80 per cent or more of the land in the MDB is used for pastoralism and agriculture (Marshall and Alexandra 2016), with the climate of the region dominated by recurring decadal droughts interspersed with flood phases (Gergis et al. 2012). As a result, the river flows in the MDB are amongst the world’s most variable, particularly in the northern Basin (Grafton et al 2014). 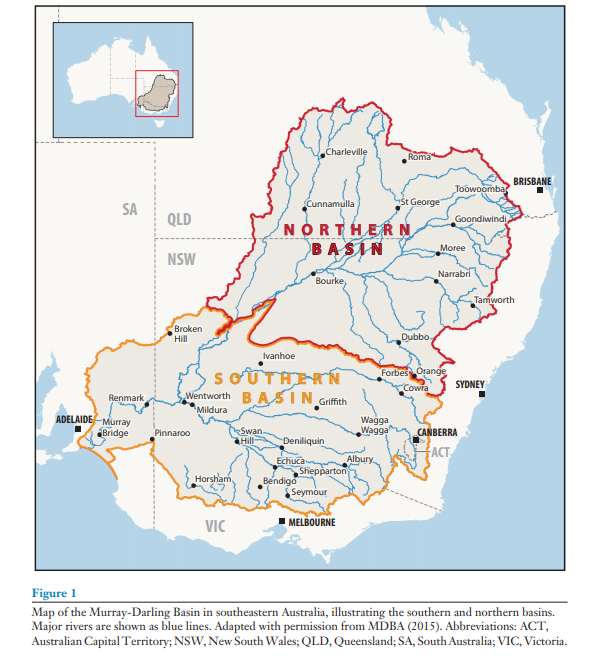 • The Murray-Darling Basin Plan – A Case Study in Water Policy

Water policy in Australia has changed radically in the last 30 years; before this, it was largely governed by a system of water allocations governed by state governments without an effective water market that allowed for the trading of these allocations. Changes began with the Strategic Water Reforms introduced by the Council of Australian Governments (CoAG) in 1994, followed in 2004 by the National Water Initiative (NWI). In 2007, the Commonwealth Government legislated the Water Act 2007, which established the Murray Darling Basin Authority (MDBA) and specified that the MDBA must prepare a plan for the management of the Murray-Darling Basin and its water resources in line with the best available scientific evidence. The Water Act gave the Commonwealth Government some legislative jurisdiction over the management of water as many areas within the Basin are areas of international ecological or cultural significance. Following a lengthy consultation process the (MDBP) was enacted into legislation in November 2012.

The Murray Darling Basin Plan aimed to reduce the consumption of water and restore the Basin’s ecological health through increasing the flow of water through the environment. In order to accomplish this objective, the government employed two strategies: (1) demand management centred on buying water entitlements and (2) supply-side measures subsidising improvements to infrastructure. Whilst both demand and supply-side mechanisms are not without issues, the former is generally regarded as more cost-effective (Grafton 2019).

Although the principle aim of the MDBP was to restore the ecological health of the MDB by reducing consumptive water allocations by approximately 20%, it also aimed to reduce restrictions on trade and improve market confidence “through a more effective water market” (MDBA 2020). Although a water market existed before the MDBP, the Basin Plan set forth new water trading rules aiming to increase the ease of which water could be traded.

…the most commonly cited principle underlying the market—that water will flow to its “highest value use”—has failed us. Value was never defined, never debated. Water does not move to its highest value use for the commodity, the economy or even the country… “Highest value use” is therefore better described as the “greatest ability to pay” (p.85).

The Murray-Darling Basin Plan has also been subject to widespread discontent within regional communities and has been subject to numerous scandals; from water theft to the legality of floodplain harvesting and controversial purchases of water that have achieved no ecological improvements to the system as they have, at the time of writing, not actually delivered any water to the environment (Crase 2019). The overall success of the MDBP has also been questioned: research found that environmental water flows were similar to, or even less than, before the Basin Plan was implemented, and have been 20% less per year than stipulated in the Basin Plan (Wentworth Group of Concerned Scientists 2020). Beasley (2021) describes the Basin Plan as a “gross mismanagement of thirteen billion dollars of your [taxpayers] money”.

Managing water was always likely to present challenges in a region as large and diverse as the Murray-Darling Basin. With ecological, cultural and social considerations, an approach to water policy that follows a narrow economic theory of supply and demand may not be sufficient to create desirable policy outcomes. In this instance, however, a more integrated approach to water policy that has attempted to balance social, economic and environmental outcomes has also failed to create desirable policy outcomes, demonstrating the complexity of water management in Australia.

Dead in the Water: A Very Angry Book About Our Greatest Ever Environmental Catastrophe – The Death of the Murray-Darling Basin’ (2021) by Richard BeasleyCrase, L. 2019. ‘Australia’s ‘watergate’: here’s what you need to know’. The Conversation, 23 April, viewed 7 July 2021 < https://theconversation.com/australias-watergate-heres-what-taxpayers-need-to-know-about-water-buybacks-115838>