In his landmark book of political economy, The Three Worlds of Welfare Capitalism, Gøsta Esping-Andersen posits that there are three welfare state archetypes that a country can fit into. Yet, Australia poses a problem for Esping-Andersen’s thesis. Esping-Anderson claims that Australia’s social security system, due to its reliance on means-tested social assistance schemes and targeted income-support benefits, constitutes a liberal welfare state—a regime classified by Esping-Andersen as selective, stigmatic and market-driven. However, the history of the Australian welfare state is far more complicated than this, to the point that Australia (and New Zealand) should be considered a distinct fourth world of welfare capitalism. Historically, Australia has operated as a “wage-earner welfare state” wherein there was a commitment to social-democratic principles of egalitarianism and social justice, but which manifested through redistribution of market incomes via wage regulation and not in terms of tax-and-spend policy à la the Nordic model. Thus, Australia stood as distinct from the other welfare regimes Esping-Andersen describes as liberal because, although it lacked the universalistic redistributive benefits of the regimes classified as social-democratic, it possessed instead a system of “predistribution” that ensured there was still a “universal social right to a minimum standard of living”.

However, Castles (1985) contends that although social spending was comparatively low, Australia did not lose complete touch with its social-democratic principles. Rather, what happened is its reliance on its instruments of predistribution strengthened. The welfare state’s development as a mechanism to support the working family created a path dependence wherein it was wages instead of welfare doing the heavy lifting for Australians of the 20th century.

Because Australia’s welfare state relies on wage regulation, its history stretches back to the introduction of minimum wage laws in South Australia in 1894. Thirteen years later in 1907, the ‘Harvester Judgment’ followed. This gave courts the power to determine wages and working conditions, a power which was used to ensure that wages were sufficient for a male worker to provide for his family. The working family was considered the basic unit of society by the labour movement and so it was these working families who the welfare state was constructed to support. The Curtin Labor government reinforced this by ‘completing’ the welfare state through expanding to provide child benefits in 1941, widow pensions in 1942, and sickness and unemployment benefits in 1945. This was in addition to the incredibly generous pension which had been federally established in 1909-10. Fiscal expansions such as these could only ever occur in the short bursts that the Australian Labor Party governed in and so when the Menzies government took power for 23 years in 1949, public spending dropped to 5% of GDP compared to the 8% GDP average. By the 1980s, Australia’s welfare spending was second-lowest in the OECD, which is one of the reasons why Esping-Andersen characterised it as a liberal welfare state. 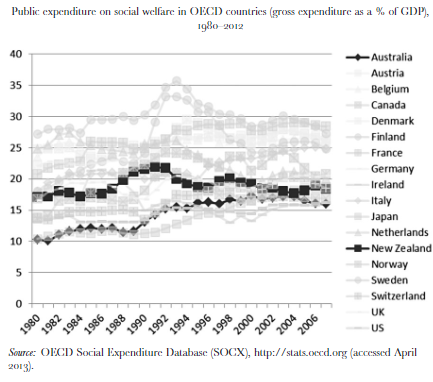 Yet, the issue with a welfare state based around wage earners is that for the 33.6% not in the workforce, there is no reliable government support. This was the case for much of the 20th century and it only worsened as existing welfare institutions were hollowed out over the course of the 1980s to 2000s. The Hawke government increased the selectiveness of welfare, consolidating the wage earner welfare state model through further wage supplementation and tax credits. The Howard government ramped it up even further, shrinking the public sector to allow private sector expansion through policy such as the 1996 Private Health Insurance Rebate. A 1983 Accord between the Labor government and the ACTU was abandoned to be replaced with the 1996 Workplace Relations Act. This accord was responsible for a greater centralisation of wage fixation and was the mechanism through which Keating established his compulsory superannuation scheme in 1992. 2005’s WorkChoices was the hardest blow yet to the industrial relations system underpinning Australia’s wage earner’s welfare state. By deregulating the wage structure through the individuation of bargaining, WorkChoices destroyed the ability of unions to secure wages and benefits from employers. WorkChoices would be rolled back and replaced by the Fair Work Act in 2009. This marked a return to a more traditional welfare model, however wage earners were still prioritised with an emphasis on “hard-working families”, carried out through social investment policies aimed at “activating” the unemployed – although there was still some welfare expansion in terms of pensions, healthcare and paid maternity leave. Social-democratic concerns of social justice and equitable growth remained, but there had also been a recasting of the relationship between the state and welfare recipients based on reciprocal obligation via being pushed into work.

All this raises a question: can Australia still be considered its own fourth world of welfare capitalism following this slew of liberal reforms? According to Castles (2001), the answer is no.  However, Castles was here writing at the height of the Howard era, when things were looking especially bleak for his thesis of a fourth welfare archetype. During the Rudd era, there was some resurrection of this wage-earner’s welfare state. Yet, recent years force us to once more question whether Australia is committed enough to social-democratic principles for it to elude the liberal categorisation. The impoverishing Newstart benefits and early rollbacks of JobKeeper and JobSeeker stand out as particularly illustrative of a neglect of these principles.

Ultimately, it would be most accurate to say that Australia no longer is its own fourth world of welfare capitalism. Rather, it is influenced by its history as a unique welfare state, even as it has gone on to evolve into a distinctly liberal regime.

Australian Bureau of Statistics. History of Pensions and Other Benefits in Australia. 1988.

Castles, F. G. The Working Class and Welfare: Reflections on the Political Development of the Welfare State in Australia and New Zealand, 1890–1980. Wellington and Sydney: Allen & Unwin, 1985.

Deeming, C. The Working Class and Welfare: Francis G. Castles on the Political Development of the Welfare State in Australia and New Zealand Thirty Years On. Social Policy & Administration 47(6), 2013.

Herscovitch, A and Stanton, D.  ‘History of social security in Australia.’ Family Matters 80, 2008.

Nordic Model, The. The Death of A Welfare State with David Sligar | The Interview | Episode 5 [Online]. https://www.youtube.com/watch?v=YcZUtNVAVrQ [October 31, 2021].