Q: What’s happening with the Australian stock market? Why did it perform so poorly at the start of the year?

A: The Australian stock market has endured a harrowing start to 2016. This has been reflected by a sharp decline in Australia’s leading share market index, the S&P/ASX 200, which captures the movement in approximately 80% of all Australian equity, colloquially known as shares. Essentially, if Australian shares (on average) increase in value, so too will the index.

From closing the 2015 calendar year at 5296 points, the S&P/ASX 200 had plunged to 4841 points by 20 January. To provide context, the last time the S&P/ASX 200 index was below this point was July 2013. So, just in a matter of weeks, the Australian share market dropped to levels not seen in over two years. Bad news!

So what’s going on?

As share prices are simply determined by forces of supply and demand, the explanation can be found in the negative view investors have taken on Australian shares following a sharp (and unexpected) devaluation in the yuan (China’s tightly controlled currency) in early January. It’s important to note that unlike most currencies, the yuan is unique in that the People’s Bank of China (China’s central bank) strategically trades currency reserves to manipulate the yuan’s value. Thus, the currency’s devaluation bore a story more to do with policy uncertainty (and the resulting shockwaves it sent into the global markets) than it did with China’s slowing economy. Nevertheless, the crippling effects it had on Australian share value were clear for two reasons. 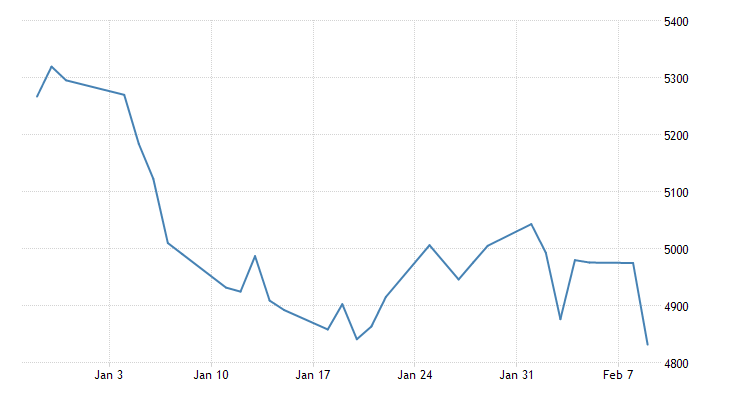 Firstly, the yuan’s devaluation exacerbates long-held concerns over China’s economic outlook. As China is Australia’s biggest trading partner, and as many Australian companies (especially mining companies) sell goods and services to Chinese customers, slower than expected growth suggests weakening demand, and in turn lower profits for Australian companies. In general, our fate is heavily tied to China – any movement in Chinese markets is likely to have an effect on Australia. It is no surprise, then, that the share market has had such a start to the year.

Strap yourselves in, there’s a bumpy road ahead.